This page is dedicated to my pets over the years. It wasn’t until relatively recently that I was ready to have pets again, and to have photos of my pets. Still, I remember the pets of my childhood, for the most part. They will be given their own space here, in time.

I recently lost my precious Mario, on February 18th, 2021. I got him in 2017, I believe in June. I’m not handling the loss of Mario very well, if I’m brutally honest. Here’s one of the more recent photos I have of him. 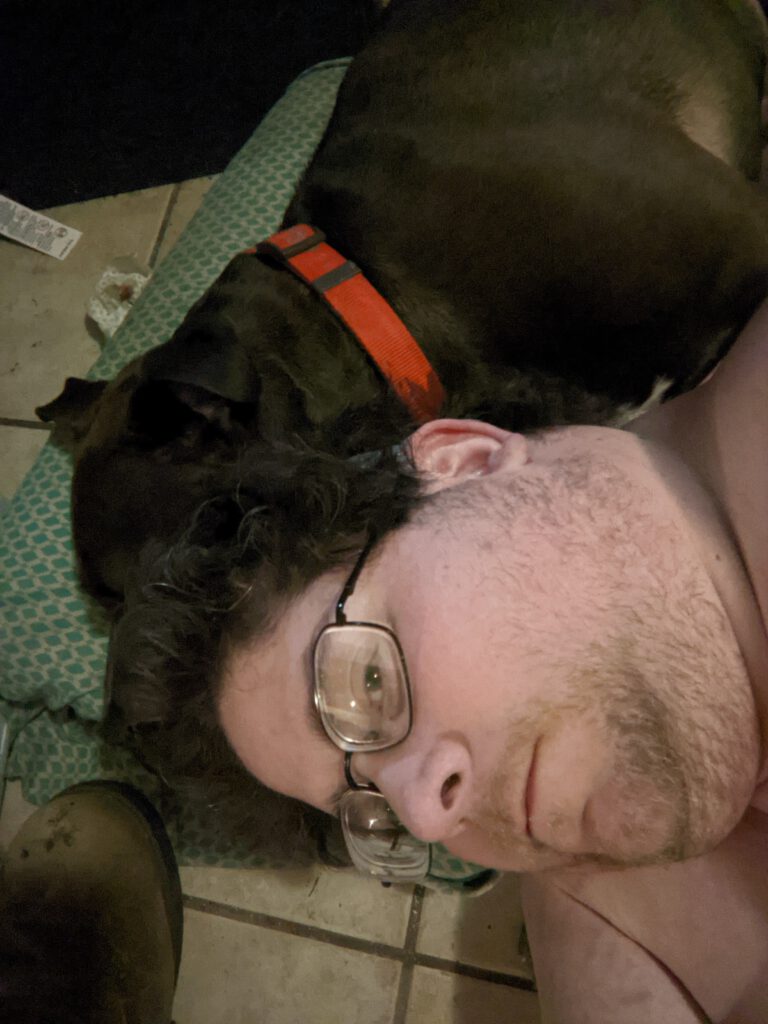 My heart still aches after the split second decision that I made that morning, as I had gone to the restroom and then came back to my bed where Mario was resting, his face partially obscured by the blankets of my bed.

I leaned down to kiss him and… in a second, my world changed. He bit me in the face with no warning, and I knew then that he was telling me he’d had enough of being in pain. He’d usually let me know when he didn’t want to be touched, or was in too much pain by grumbling or leaning away.

Not this time. This time, I got no warning. That moment replays every time I think about him, now. Same thing with when I was in the office with him, waiting for him to be euthanised.

I wrote about that event here, on Reddit, not long after the visit.

Still, one day I hope he and I will meet again and forgive each other.

The oldest doggo I remember is a doggo that I think I found as a kid with a huge cut in the neck. He was golden-brown-furred. A chow-chow dog, if I remember right.

We also had a doggo that gave birth to a litter of puppies but I don’t remember her name, or what she looks like, likewise for her litter. This was when I was a kid, maybe around kindergarten age?

I remember, but I don’t hurt with them. There’s the chow-chow pupper I had in high school, his name was Chewy. He died by way of jumping over the fence and getting strangled. Because asshole neighbors. I didn’t find out about this until I got home from school one day, and found him lying dead on the ground. Beautiful brown curly fluffy fur. Very gentle and loving.

Then there’s Chata, I didn’t name her, but she had lots of litters, of which I think 2-3 I remember the name of. A dark brown pit bull. There was Gordo, a brown or black pibble, and then there’s Pirato, one of my favorite doggos, also a pibble, with white fur and patches of brown and black. Gordo was with mum’s ex. Pirato was taken by animal control because of asshole kids. They’re no longer with us.

Then another doggo I also named Pirato because they looked alike. That one died in my arms from Parvo. I’m fairly certain I had him around junior high or high school.

Afer that, it took quite a number of years before I felt ready to have a doggo and the next time I had a doggo was in Mexico. I’m not sure what breed he was, but he was a lovely brown-brindle short-haired dog. All I have left of him is his blue harness. He was murdered. I do not know who did it, but I suspect I know who did it.

Then I had an adorable black pomeranian or something of that breed with an ex of mine. Raised her from puppy-hood but ultimately gave her up to the ex when I was homeless. And got dumped on.

Meeting Cherry again a month later, she acted like she didn’t recognize me, which broke me. I’m no longer in touch with my ex, so the status of this one is unknown.

If I had any other doggos… I no longer remember them. To them, I say: I hope I get to see you again when I cross the bridge. To be forgotten is worse than death.